Richeh is a young girl with long sky blue hair and sky blue eyes. She wears the apprentice robes of Qifrey's atelier.

Richeh has a seemingly emotionless and childish personality, being very stubborn, individualistic, and resentful of authority figures that tell her what to do. She often refers to herself in the third person, another facet of her childlike personality. She is opposed to the idea of growing up and wishes to stay as she is forever in order to maintain her unique magic and individuality.

She specializes in crystal magic, particularly creating transparent crystal ribbons. She also excels at drawing small, intricate glyphs, and has been shown to be adept at connecting these together to form magical portal holes. Her individualistic magic style is expressed in her more out of the box solutions to problems and tests.

Richeh was born in the Great Hall to a family of witches. Four years before the events of the manga, Richeh requested to apprentice alongside her brother, Riliphin. She joined Qifrey's atelier after breaking off her apprenticeship with her first professor.

A Touch of Magic

Richeh is first introduced when Qifrey leaves Coco in the entryway of his atelier. Tetia is thanking Coco back and forth, and Richeh notes that if you leave Tetia be she'll quiet down. When Coco says she only started doing magic the other day, Richeh shares a concerned glance with Tetia, before the other girl begins telling Coco of the rumors they'd heard. Before Coco can respond, Qifrey comes back and tells Richeh and Tetia to wait outside which they agree to do.

Richeh is seen the next day as she is eating dinner with Tetia. She asks why Tetia isn't eating, to which Tetia says she will but she's really concerned for Coco at that moment. Richeh stands up to get seconds, causing Tetia to explain she's acting too normal.

Likely days later, Richeh accompanies Qifrey and his other apprentices to The Starry Sword. When Coco says that due to Agott's amazing magic she must have an amazing heart as well, Richeh says she shouldn't get her hopes up about the girl. She accompanies Tetia and Coco as Mr. Nolnoa explains how Conjuring Ink is made and follows the two down the stairs to look at Ink Wands for Coco. When Coco runs out of the shop, Richeh follows Tetia in the chase after her. Once they catch up to her, Richeh is the first to realize they are no longer in Kalhn and runs after Tetia when the girl realizes there's a dragon chasing after them.

Qifrey is Richeh's current professor, he took her into his atelier after being dismissed by her first professor. She seems to trust him enough that he won't force her to do magic she doesn't want to do, but still has bouts of stubbornness and dissatisfaction with his instruction.

Coco is Richeh's fellow apprentice under Qifrey, she often doesn't understand Coco's naive fascination with magic but gets along well with her.

Riliphin is Richeh's older brother, the two were evidently very close in childhood and his love of Richeh's magic is one of the reasons she hopes to keep her magic free of outside influence.

Euini was one of Richeh's fellow test-takers during the second test. 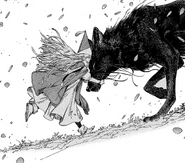 Retrieved from "https://witch-hat-atelier.fandom.com/wiki/Richeh?oldid=3118"
Community content is available under CC-BY-SA unless otherwise noted.