Coco (ココ) is the protagonist of Witch Hat Atelier. She is a young girl who becomes an apprentice witch under the witch Qifrey after her initial accidental use of forbidden magic turned her mother to crystal. She hopes to search the Tower of Tomes for the book containing the magic, in order to reverse its effects on her mother.

Coco is a young blonde girl with neat chin-length hair and golden eyes.

She is quite a dork for magic, with a child-like (even for her age) widen eyed look whenever she sees things that are common for every other witch. The very magic that inspired her was simple magic made by Qifrey's watcher that caused glowstone path to light up. 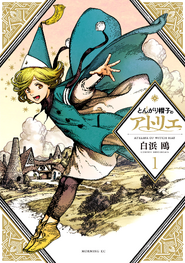 Coco's full appearance
Add a photo to this gallery

One day, as Coco did her chores, she saw winged chariots arriving at her mother's clothing shop. She bumped into Qifrey, who intended to buy some cloth. Qifrey observed her cut a piece of cloth and remarked that her skill was magic itself. Embarrassed, Coco told Qifrey that her fascination towards magic began since she was little. Her mother had brought her to a castle fair, where she bought a magic picture book and a wand from a mysterious, masked witch. Qiffrey seemed disturbed of her story, though he said nothing. After several kids accidentally broke the winged chariot, Qifrey offered to fix it. Although she was not allowed to, Coco managed to take a peek of Qifrey drawing magic from the rooftop. Later that night, Coco decided to try drawing magic using the magic picture book and wand she had bought. Being successful after several tries, Coco decided to draw more complicated magic. Qifrey snatched her away from the drawing at the last minute and saved her from a explosive light bursting from the magic circle. Whilst reprimanding her for carelessly drawing magic, her mother was caught in the forbidden magic and was turned into a crystal Coco was further horrified that Qifrey would erase her memories for using magic. Qifrey realized that she was his only lead to the Brimmed Hats, a group of witches performing forbidden magic. Qifrey decided to take her up as an apprentice in his atelier.

Retrieved from "https://witch-hat-atelier.fandom.com/wiki/Coco?oldid=1942"
Community content is available under CC-BY-SA unless otherwise noted.